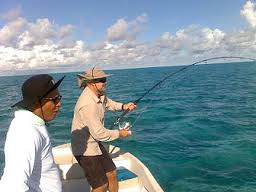 Of the many forms of fishing, the one that holds the most excitement for me is reef fishing. Every trip out is a learning experience and they are packed with life as any diver can tell you. For a family trip out it might be one of the best; the sheer variety of shapes and colours of the fish will thrill any child. Chartering any form of game fishing trip can make wonderful memories. Reefs are one of the most populated ecosystems in the world. According to official surveys  there are 1625 species of fish in the Great Barrier Reef system that have been recorded. 1400 of these live nowhere else but in reefs. That means; for variety when fishing there is nothing like a local reef, even if you have specific target species in mind. Chances are quite high you will not catch what you would have liked but the actual result can often be far more entertaining and surprising.    Gear-wise a braided line is preferable, in that it will often be pulled against the coral and cut or abraded otherwise. Many reef fish also have powerful teeth and jaws too, you can look them while doing reef fishing in Sydney which will cut standard lines. Parrotfish, for example have strong beaks which they often use to grind dead coral and with equal ease a normal line. A simple large weight is best when fishing reefs, as the majority of fish will be at the bottom; living in or searching through the obstructions for a meal. So is fresh or live bait, as most food will be fresh there frozen and rotten baits are less effective in reefs, some of the fish have the option of being picky with so much opportunity around them.

In terms of rods a strong one is preferable as when reef fishing you will often be fighting as soon as the fish is hooked, as it may try to escape to the safety of hollows and snags in the reef. A spinner reel is a decent fit for reef fishing. As for popular species to catch; the variety is near endless. Bream and emperor fish species are one possibility, varied snapper species another. You might catch coral trout species or instead the massive groupers and cods that prefer reefs. Sweetlips and wrasses  are also common reef fish catches by deep sea fishing charters in Sydney, even the odd-looking surgeonfish are possible (avoid the sharp venomous spines!). Be aware that not everything you hook is safe to handle as the surgeonfish above indicates … it is entirely possible you might catch even more exotic and venomous species such as lionfish. If you are not aware of the details of the species you caught; do not handle, if possible ask a guide.      Finally be aware many reefs are restricted from fishing by law as are national park areas; whenever possible follow the laws and bag limits. When in doubt: catch and release.

← Looking Great on a Surfing Trip
What Makes Horse Riding Enjoyable and Interesting? →